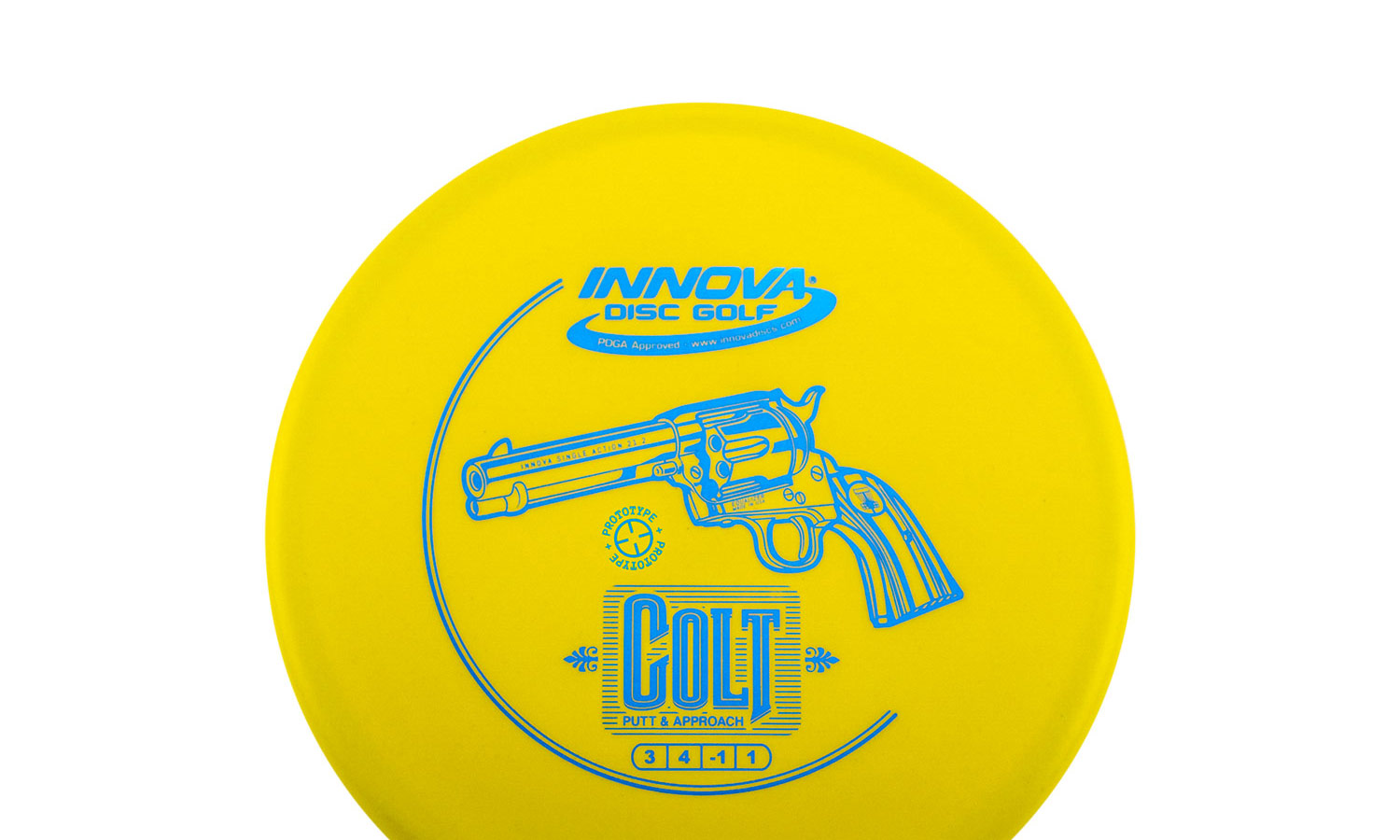 Innova Colt is a small low-profile disc that resembles the XD and Classic Roc discs. This putt and approach disc is not one you could call an excellent flier, at least when you talk about straightness. Is this a contender for the best disc golf disc? We’ll see.

Dave Dunipace of Innova nicknamed it “The Great Equalizer,” and it’s a good disc for approaching. Although it has a shallow rim, the beads on the surface help for good grips. The disc is almost perfect for short approaches, upshots, and long putts. Its profile makes for power and a modified fan grip, with a VTech design that enables better resistance and helps you achieve good underarm throws. This design enables the disc to perform well enough, even in bad climate conditions.

The small shape and the rounded part of its wing also facilitates this resistance feature. With Colt, throwing from a long distance is pretty easy. This is because the shape of the disc aids a nice release. It could be thrown in straight lines as well as shaped lines.

The Innova Colt disc is a creation of the Innova Company, known for its prowess in creating golf discs. It is a leading private firm in Europe set to leverage technology to enhance how we live. The Innova Company kicked off in Italy but has expanded to California where its research, production, and manufacturing occur.

Colt discs and every other equipment owned by Innova for the disc golf game originate from the company’s headquarters in Ontario, California. Innova has been in existence since 1983 and has thrived in a competitive world where technology lies at the center of everything.

The Innova colt disc is a putter. It is neither a driver nor a mid-range disc. Putters have thinner rims, and their edges are wider than that of drivers and mid-range discs.

The Colt disc is primarily for beginners. If you are new to the game, this disc is for you. People from intermediate and advanced levels can also use the disc. It is more suitable for people who are making their debut in the world of disc golf. The Colt disc is beginner-friendly.

Types of plastics for Innova Colt

There are many discs manufactured by the company that golfers can choose from. Colt discs are known for their low profile small diameter size. They are straight flyers, although not the best you can find when it comes to the straightness side of things. Colt’s speed rating is 3, the glide rating is 3, the turn rating is -1, and the rating for the fade is 1.

The Colt disc is great for putting, approaching, and sometimes driving. The flat-top makes for farther flights. It will not have you struggling for a nice release. This disc has torque resistance and flies pretty well even when the weather is not favorable.

Is the Innova Colt Disc For You?

The Colt disc would find a spot in a disc golf beginner’s bag easily. The disc is beginner-friendly. As a newbie in golf, you shouldn’t find it hard to use Innova Colt discs because they do not need any special training or skill.

If you need a small, nice putter for upshots and short approaches, then try out the Innova Colt disc. Although the putter is mostly known as the beginner’s disc, professionals also use it.

Final Thoughts On The Innova Colt:

The Innova Colt disc is a low-profile disc of a small diameter. It comes with a VTech design disc and flies straight. The disc is a putter, not a driver or a mid-range disc, and is great for upshots and short approaches. Dave Dunipace called this putt and approach disc “The Great Equalizer.”  The Colt disc is beginner-friendly, and it is highly recommended for everyone who wishes to give golf a try. No need to worry about your throws during bad climate conditions when you have a Colt disc. This is a must-have for any disc golf bag!

Thanks for reading this Innova Colt Review, I hope it was helpful in your buying decision, I hope you give this disc a try!