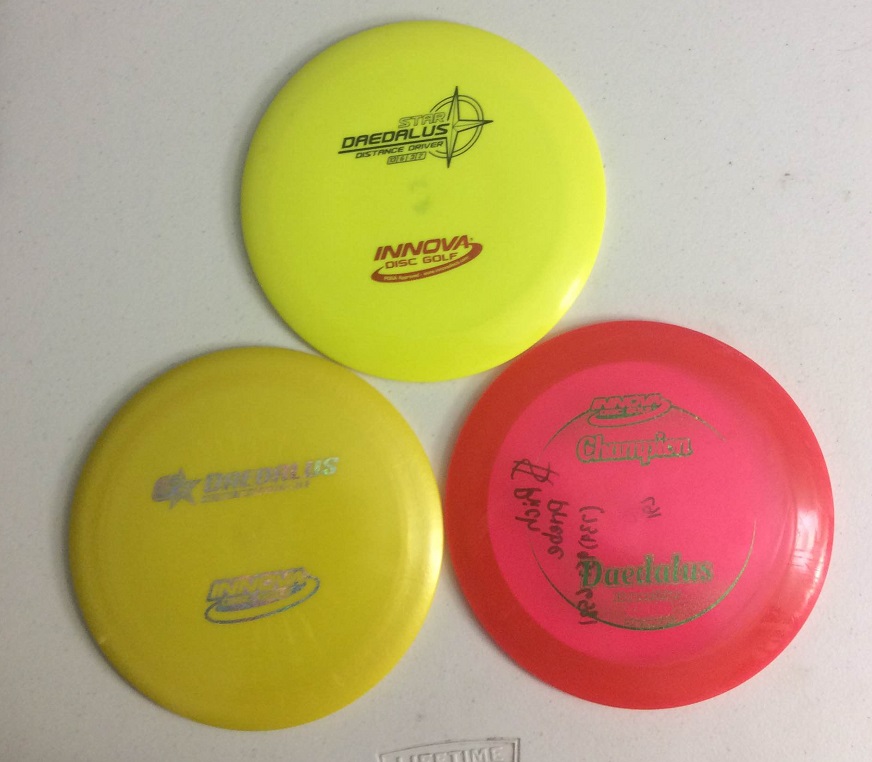 The Innova Daedalus Driver. The 1st high speed driver that intermediate players can pick up and throw for an increase in distance from the tee pad.

The Daedalus distance driver was released by Innova back at the end of 2013. Originally, it was only released in the newer G star plastic mold. Once the disc became more popular, it was then expanded to the Star line and the very popular Champion plastic.   If you are interested in other disc review check out our best disc golf discs page.

Let's get into the Innova Daedalus Review! 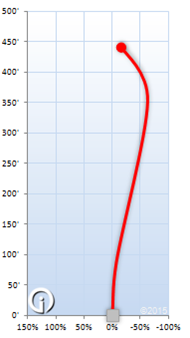 The Innova Daedalus is a very flippy disc, especially for a distance driver. I will contend with you that this disc is the #1 reason I am able to throw past 300 ft. off of the teepad. I have read reviews and heard people say this disc is "too advanced" for beginners.   I gained at least 50-60ft in distance within the first week of throwing it.

Before the Daedalus, I was throwing an Innova DX Archangel and a Champion Monarch as my main drivers. I was still only able to throw about 250ft. I picked up the Daedalus as my first "high speed" driver at Speed 13.

Because it was SO flippy, I was able to compensate the disc as a stable driver until I improved my technique enough to overturn it.

For the Experienced Thrower...

This disc is a flippy understable driver that will sail right for experienced throwers and keep going with a little fade if you're lucky. You most likely have the "Snap" and technique off the pad to reach past 350 ft. IF YOU DO, than this disc will be more of a "utility disc" for your game.

For you, the G Star Daedalus won't provide you  with more distance, but it WILLgive you the "OUT-OF-THE-BOX" Roller disc you've been looking for. The Champion Daedalus might be more comfortable for your playing ability as a "Fade to Right" driver.

Champion plastic tends to be more stable than other Innova plastic molds. This will hold true to the Daedalus driver.

The Daedalus has a thin profile with a dome shape to it that makes the disc really smooth looking.    I personally like placing my thumb on the very edge of the flat top, right before the disc fades into the rounded groove. 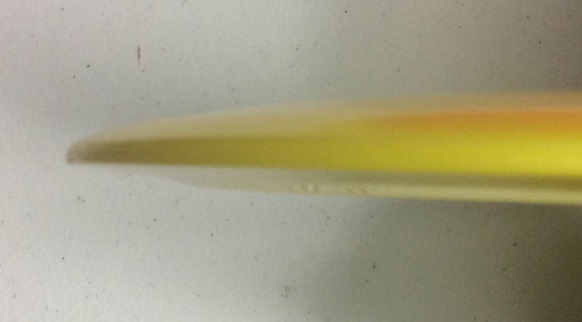 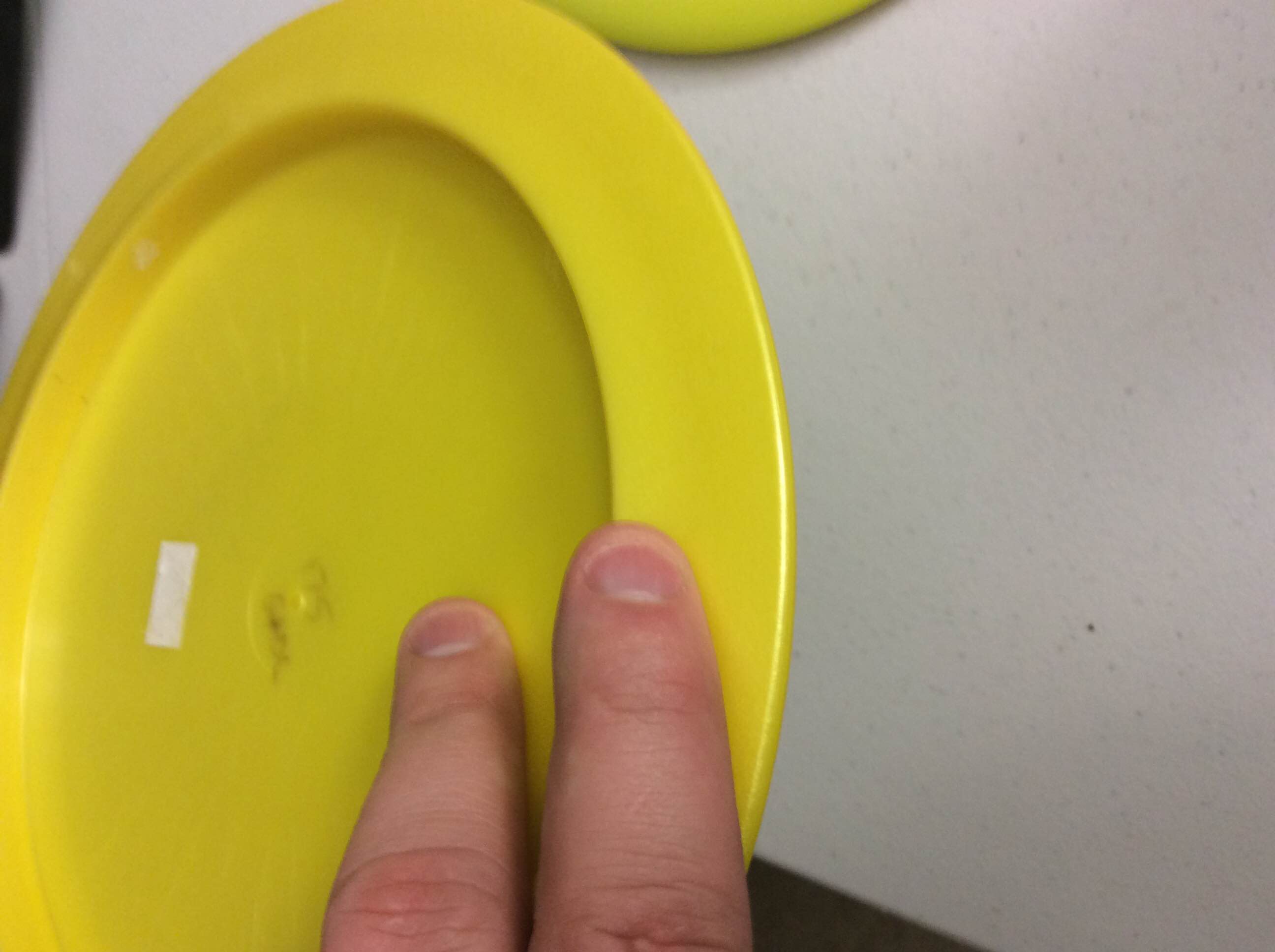 The width on the underside of the disc is a little longer than the length of my forefinger.    The rim width is 2.3 cm. This is pretty consistent with other high speed drivers Innova makes.

The rim width, along with the grip of the G Star plastic gives me the ability to "Power Grip" the Daedalus the way a distance driver should be thrown. 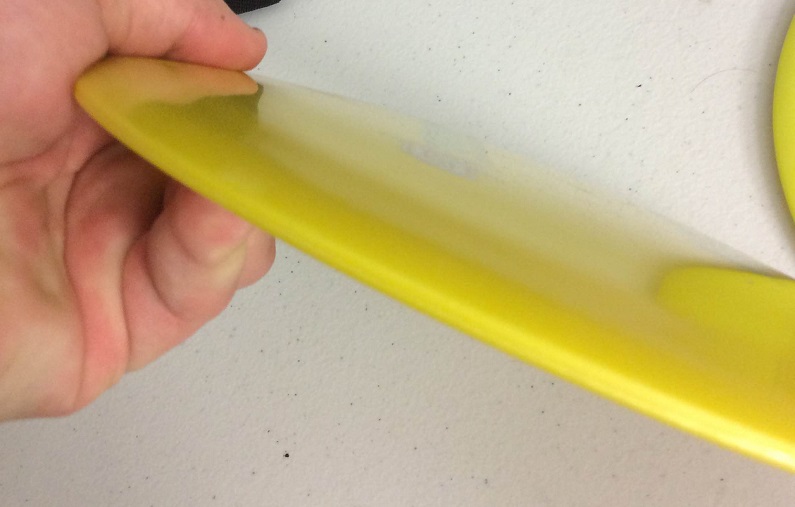 I mentioned this a little bit in the first part of the review, but now I'm going to explain a little more in depth why it MATTERS what Plastic Mold you choose for the Innova Daedalus. 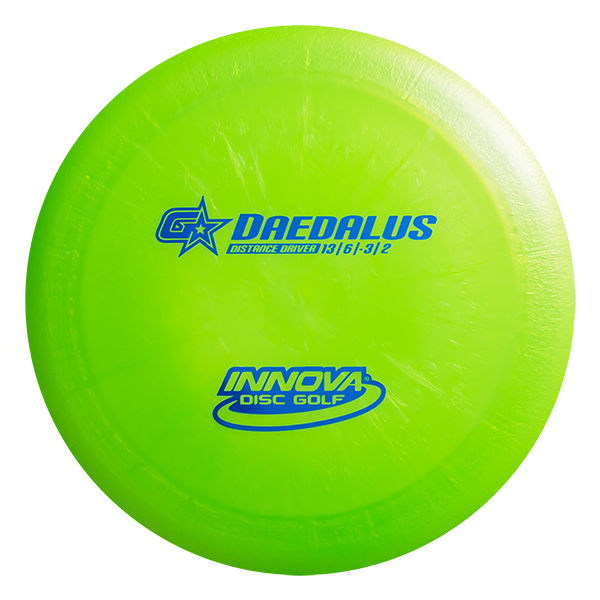 G Star is a hybrid of the popular Star line, and the "G' stands for gummy. This plastic blend by Innova gives MORE GRIP than any other Innova plastic mold (even in cold weather).  Using the Daedalus in this plastic with a power grip will help you control your shot without slipping out of your hands.

One of the biggest benefits in choosing to use the G Star Daedalus is that; because of the plastic choice, the disc will be more forgiving for your arm speed. In fact, if you can only throw about 250 ft, you're probably not going to see the SAME FLIGHT CHARACTERISTICS as pictured above.

This disc will be more of a stable distance driver pushing your teepad drives closer to 300 ft until you get your technique and snap down pat.

If you're a more experienced disc golfer, but are still curious about the Daedalus; I would suggest for you to try it out in the Champion plastic instead of G Star or Star line molds.

Why?  I'll give you my THREE reasons: 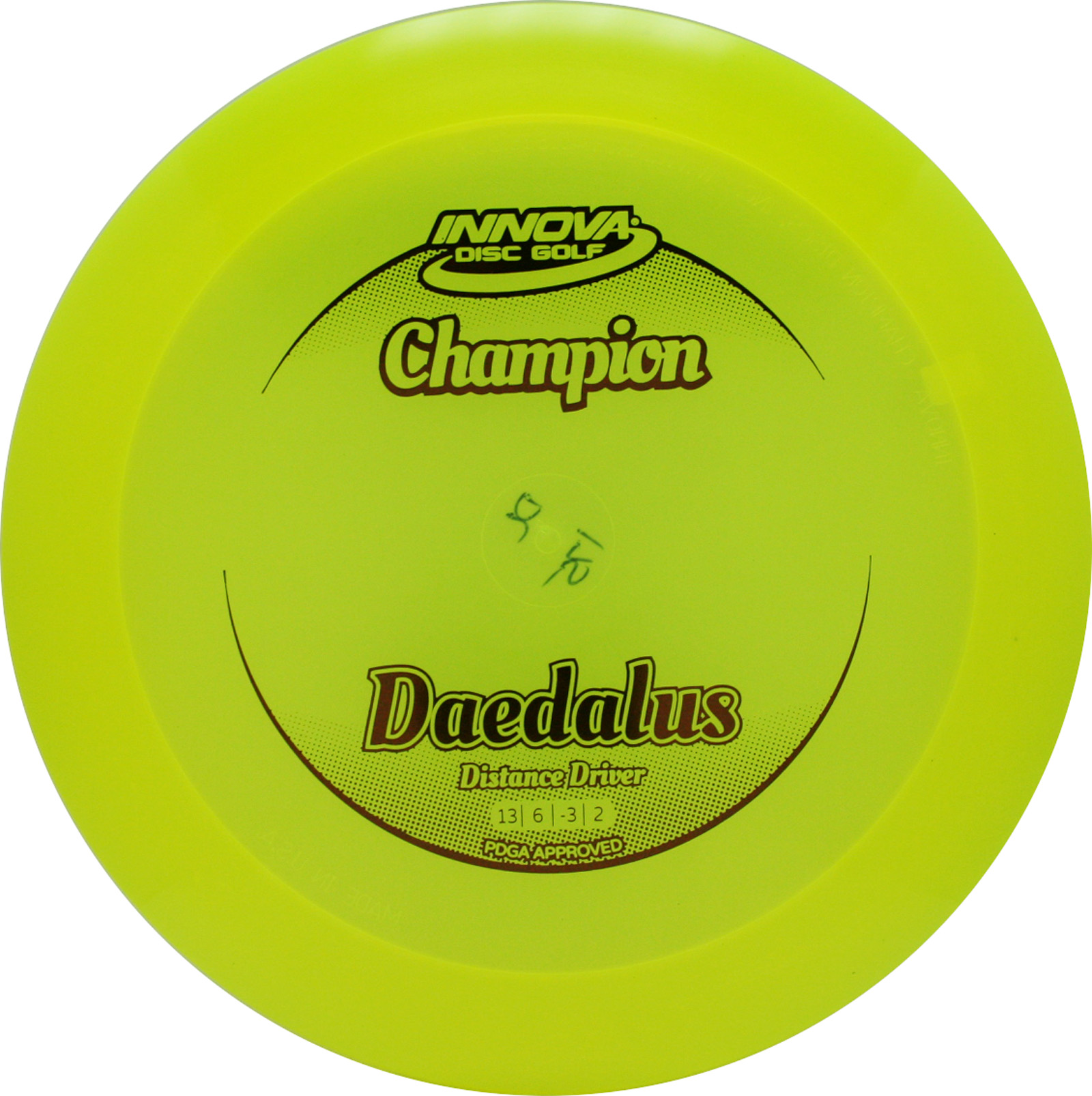 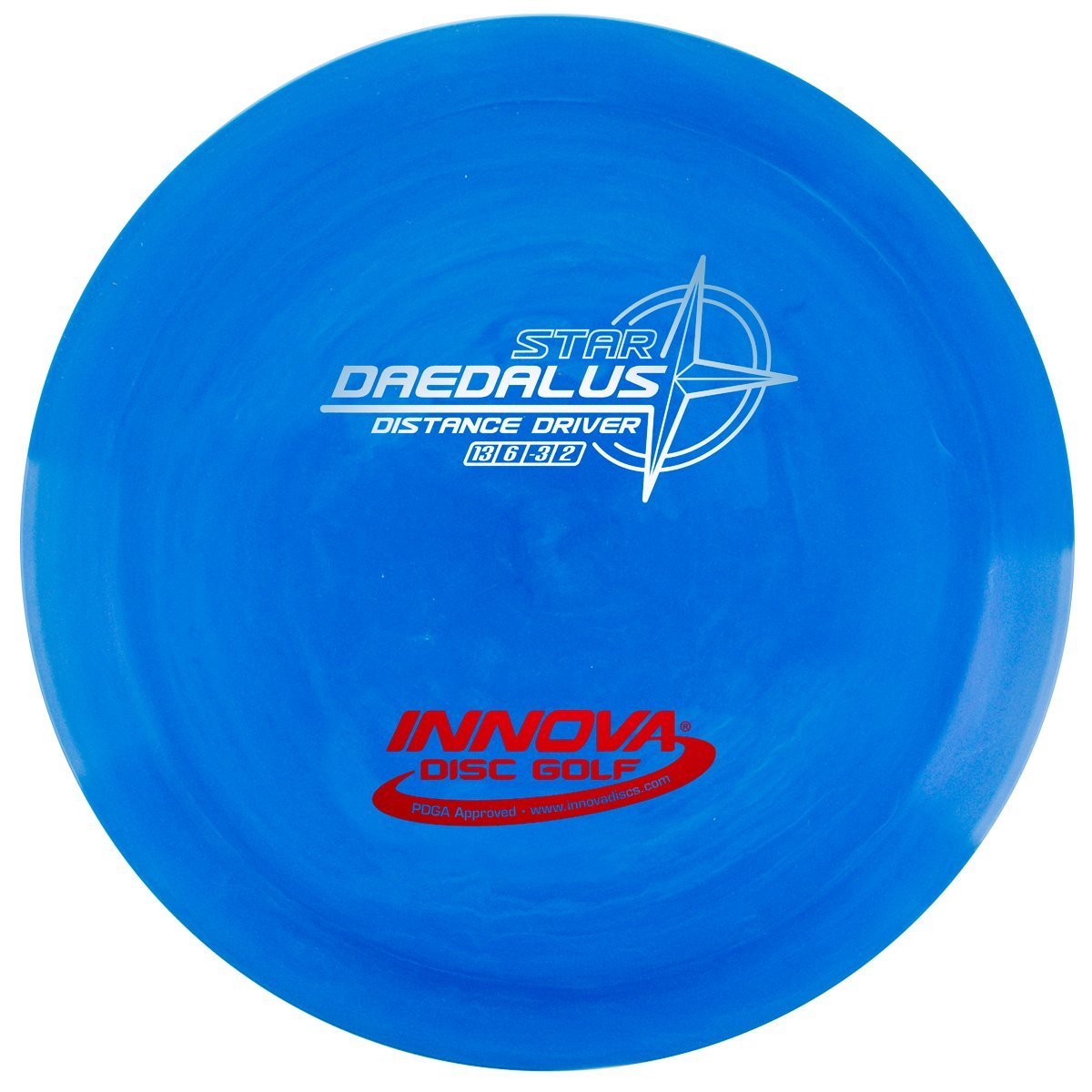 The Star Line blend of plastic by Innova is a popular choice for thousands of disc golfers around the country.  In my experience throwing the Daedalus in this mold, it was the LEAST consistent to stay true to the flight patterns prescribed.

For this reason, I didn't come up with much to talk about. I personally haven't had good luck with this plastic blend. But, if you have taken a liking to the Innova Star plastic, than the Daedalus might work for you.  It has been the MOST understable version of the Daedalus that I have come across (and it's already flippy enough). My warning: TREAD LIGHTLY.

Best Shots for the Daedalus

Ok, so none of us are probably going to have the power or technique like Ricky, but the Daedalus is a great choice for certain shot selections. 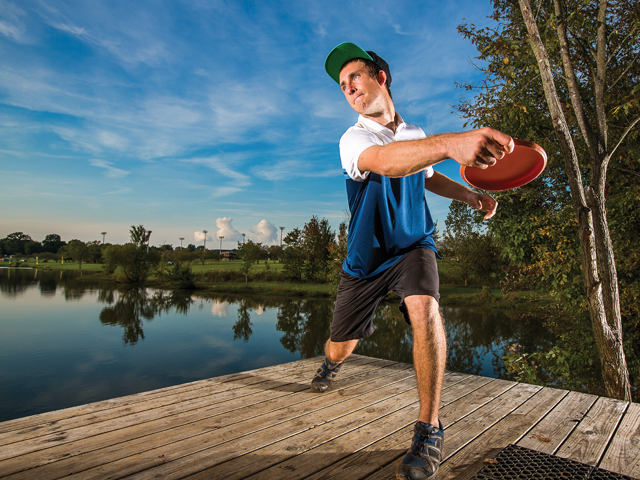 This disc EXCELS in a tailwind. Putting a "Hyzer Angle" off the pad and letting it rip will get this disc to push closer to 375 ft. Max disc weight of 175g in ALLplastic molds is suggested. I say this because this disc by nature is already very understable and flippy. If you have any real throwing power, you'll already have to compensate.  If you can throw 400 ft on your drives, than there's only one use of this disc for you.....

Out of Box Roller

This technique is not one of mine, mainly because the courses I play at don't really call for it. I have way more forehand shots than roller attempts. However, I've only heard great things from others I play with that like the disc for what it does as their Roller disc.  I'll take their word for it.

The Innova Daedalus is the best disc golf driver for intermediate players wanting more distance. Period. You will be able to reach beyond 300 ft from the pad with a forgiving disc (even if it's a 13 speed).

Check it out over at Infinite Discs. I choose to link to them because they are truly the CHEAPEST disc golf store online with the biggest selection.