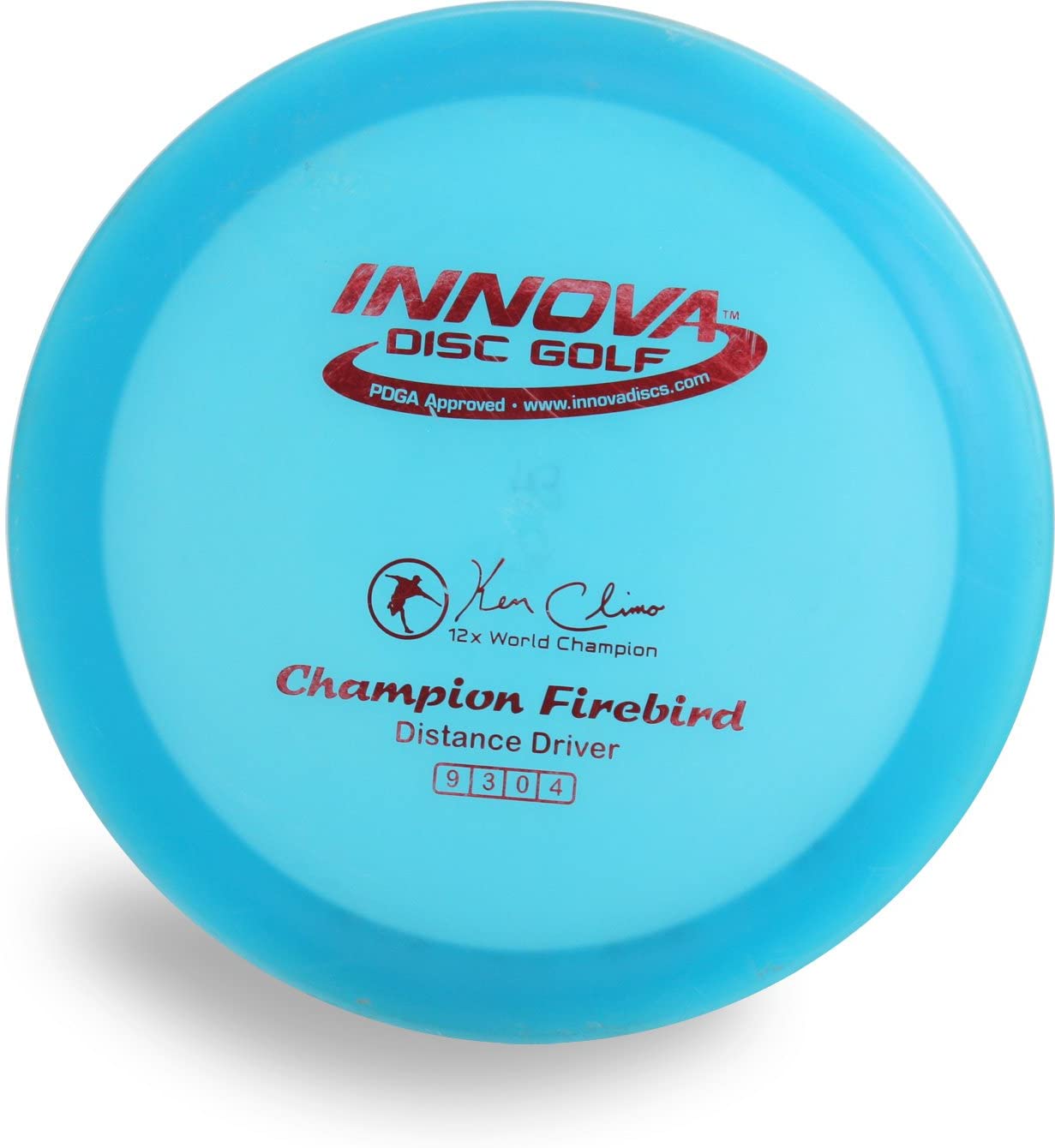 The Innova Firebird disc is one of the very well-known discs in disc golf. And that’s down to its greater speed and stability, leading to many golfers referring to it as the “Champions Firebird.”

Being of the most reliable overstable drivers available, this might just be the ideal multipurpose disc for the forehand. With the disc, it’s possible to hurl drives into the wind with confidence. Overall it’s what we often consider one of the best disc golf discs for advanced players.

The Firebird has become a choice for elite (pro) players due to its excellence at long-range flex shots. And its ability to readily thrive in strong headwinds makes it an excellent forehand driver.

Manufactured by Innova Champion Discs Inc., known simply as Innova and established in 1983, the company is a standout disc golf brand in the US. It was one of the first to create disc golf gear. CEO Dave Dunipace is a disc golf coach who also competes in tournaments.

The Innova Firebird is an overstable distance driver. Check out its specs and ratings:

It’s no surprise that the Firebird is one of Innova’s most popular fairway drivers. It features a rim that is just the appropriate size for most hands, whether large or small. It also comes with a great deal of stability.

The Innova Firebird is one of the most consistent discs you can grab. And should you need a disc that won’t fade even in a stiff headwind, this is it.

If you need a disc to fade around a bend and give you a large skip or need to throw an accurate hyzer/spike hyzer, this could be your go-to disc.

Type of Plastics for Innova Firebird

Innova offers a diverse selection of discs, ranging from Disc Golf competition discs to bespoke discs for special tournaments, all of which are graded from beginner to professional.

Star, Champion, Pro, and DX are four separate plastic lines created by Innova, each with its flying characteristics. The varieties of plastic come with unique compositions better suited to specific throws or lengths. So it makes sense to go over the distinctions before deciding which is best for your game.

The Firebird comes in DX plastics and is available in a broad range of disc models and weights. These discs are low-cost and provide good traction in virtually all types of weather.

DX discs tend to break in with prolonged usage and eventually take on new and different flight characteristics. Many professional players carry multiple DX discs of their favorites with them to give diverse flight patterns in different situations. Glow-in-the-dark discs are available on some DX discs. Custom hot stamping is offered on the majority of models.

Innova provides its clients with over a hundred disc alternatives, which is a large number. Every disc golfer ought to have a basic understanding of disc ratings because they show how well the disc will operate under ideal conditions. The Firebird has 9-speed, 3-glide, zero turn, and high 4-fade rating.

The Firebird boasts a large measure of overstability and performs better against headwinds.

You’ll notice it drifting to the left to around 300 feet after you throw it. Then, as it loses speed, you’ll see it fade quite quickly and that’s down to its high fade rating. The maximum flight distance a Firebird can achieve is pretty near 360 feet.

Who’s The Firebird Best Suited To?

This Firebird disc is designed for intermediate to advanced-level players as newbies are unlikely to have sufficient arm speed to allow the Firebird to follow its flight pattern accurately.

It may not be the most beginner-friendly because of its level of overstability. So if a newbie player attempts to attain a longer distance, the ball would either roll over or fade significantly while in the flight. An overstable driver is required for more experienced players with faster arm speeds, so the Firebird is suitable for Advanced players.

The Firebird is an excellent backhand or forehand disc. It’s a fantastic bonus for anybody who discovers it. When launched at the appropriate angle, this disc will execute a lovely s-curve and fade back in towards the finish every time. This is particularly beneficial when you’ve got obstacles in your way trying to stop you from hitting the basket.

If you’ve been playing for quite a while, then the Firebird is a disc that you definitely should try. I hope you’ve enjoyed this Innova Firebird Review, and you’ll give this disc a shot!