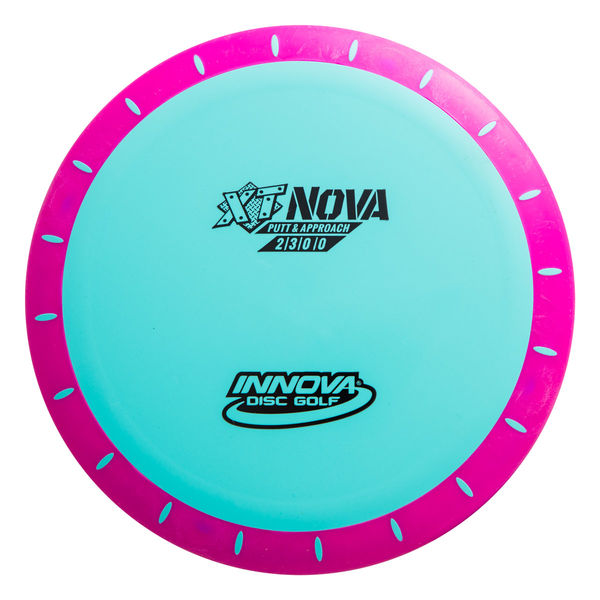 The Innova Nova is a spectacular putt and approach disc with an over-mold design. The disc has two different blends of plastic. One plastic makes for the flight plate, while the other is the rim. The former is tacky, while the latter is so soft and makes for a better grip. The tacky plastic for the flight plate is designed for softer landings which help you predict where you’re approach shot is going to land.

This is one disc golf disc you could trust with accuracy; it is so predictable. The disc holds your line, and it is so consistent to the core. When you put in more effort than is necessary, there is a tendency that the disc may flip and turn over. If you enjoy playing around trees, you may have to skip this disc; it may crack if it hits a tree. You might have to get another disc if the intersection of the flight plate and the rim hits a tree. It has a great and nice grip, glides so well, and is so controllable. The blend enhances the flight rate and the feel of the disc in the player’s hand. You do not have to worry about your disc rolling away when flying the Innova Nova. It sticks to the ground when it is thrown.

The Innova Nova is the port of call when you need straight-flying shots, hyzer flips, and turnovers. The disc is very capable for teaching beginners angles for shots and putts. Using this disc for short-range putts is just amazing to watch. It is also great for backhand shots. Throw this disc with the right hyzer, and you will see what a dead straight shot you can get out of it. The disc is a consistent and reliable one; it also requires a greater force or energy.

Innova Nova is the brainchild of Innova, who is considered one of the top disc golf companies around. This company is privately owned and has been producing discs for the game of golf since 1983. The Innova Company is the creation of Dave Dunipace and Harold Duvall and it operates out of Ontario, California. Check out our reviews of some of the best Innova discs!

Types of plastic and weight

The Innova Nova can be made out of XT plastic, DX plastic, GStar plastic, Champion plastic, Pro plastic.

Innova Nova is a putt and approach disc. It is neither a driver nor a mid-range disc. Putters are not known to have such speed as their counterparts.

When compared with that of the driver or mid-range disc, the putter’s speed comes running behind. It has a lesser speed. It has thinner rims too. Such qualities enable straight flights and prevent the disc from going off the right path. This is what helps the disc to fly dead straight and, at that, remain controllable.

The Innova Nova is recommended for everyone. Beginners, intermediate players, and pros can use it.

Why we love it

When it comes to flight, this disc is a dead straight flier. It glides so well. The speed rating of the disc is 2, the glide rating is 3, the turn rating is 0, and the fade rating is also 0.

The disc is known for being a super straight flier. With its flight, you could easily predict the outcome of your putt and that’s why it ranks highly in terms of consistency and accuracy.

Who Should Go For the Nova?

A beginner who wishes to build their level of skill in making putts could opt for the Nova. But a player of the intermediate level could also use it while pros in the game are not left out as well. This putt and approach disc is for everyone who has an interest in golfing.

The Innova Nova is a putt and approach disc that flies super straight and is so predictable. It is produced by the Innova company. It is a disc for everyone and is one disc you do not fly around trees. The Nova comes in so many plastics and makes the list of top-rated discs in terms of accuracy.