Innova has been serving the needs of disc golfers since 1983. In patenting the first disc specifically for Disc Golf, Innova established itself as the foremost expert for the sport’s equipment. Dave Dunipace, the creator of the Eagle (the first disc), continues to serve as Innova’s CEO and as a Disc Golf coach, as well as playing competitively.

Innova offers a wide range of discs, from Disc Golf tournament discs to custom discs for events – all rated beginner to pro. They are made from eight types of plastic: Star, GStar, Champion, XT, Driver Pro, KC Pro, R-Pro, and DX. Each plastic type has a different make-up and is best suited to particular throws or distances. 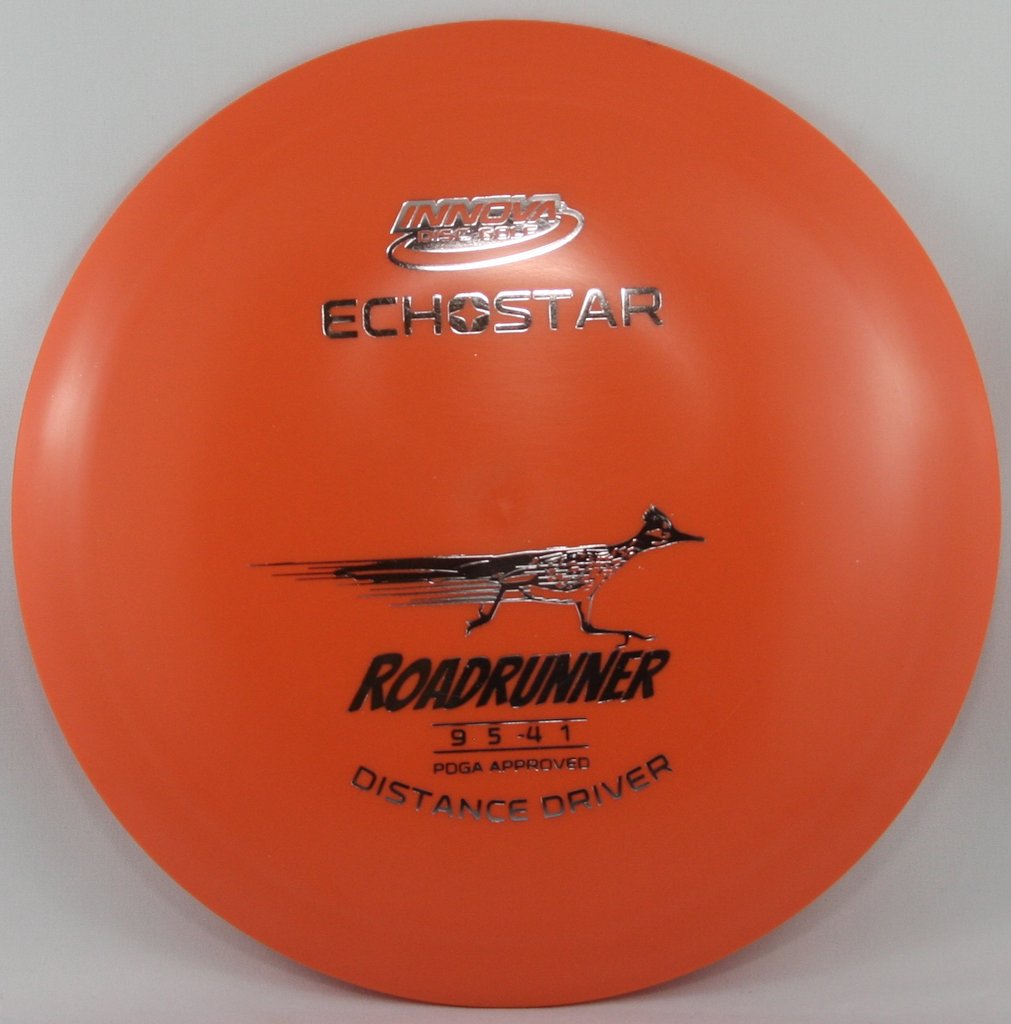 The various models are rated in four areas (Speed, Glide, Turn, and Fade), which together describe the potential flight path of a disc. Discs are categorized on Innova’s site by Speed Rating (from Speed 1 to Speed 14), which further breaks down into distance drivers, fairway drivers, mid-range drivers, and putt and approach. It’s also important to note that discs should only be compared to others with the same Speed rating – Speed has the greatest impact on flight path, so comparing a Speed 9 to a Speed 4 is like comparing apples to oranges.

The Roadrunner was introduced in 2005 and has since been a favorite of pros and newbies alike. At a Speed Rating of 9, Innova considers it a distance driver and it is known for being exceptionally versatile. This versatility comes from its three other ratings – the glide rating is 5, turn is -4, and fade is 1. Put together, this means the Roadrunner is a slower distance driver than most (9 is the lowest rating for the class), glides well, tends to turn to the right at the beginning of the flight, and finishes straighter than most. 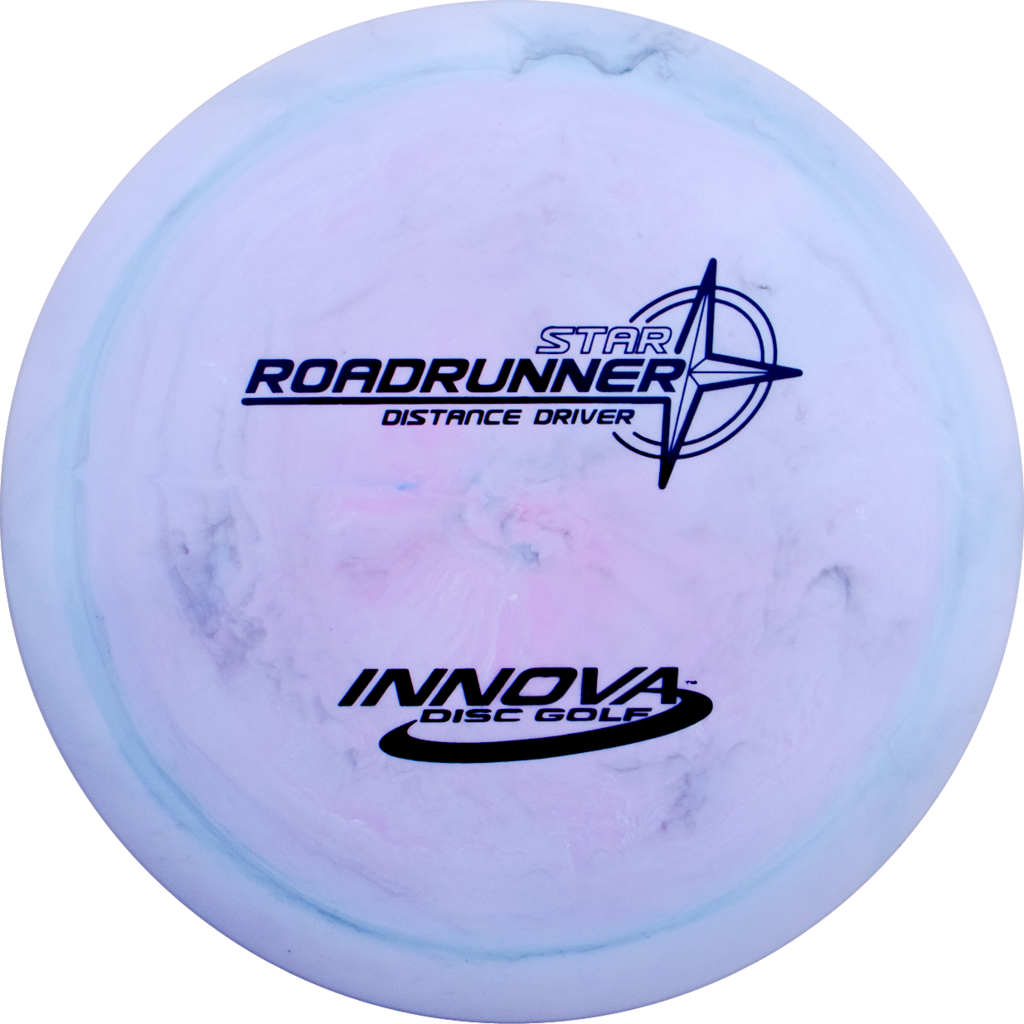 In terms of overall flight path, Innova indicates that for newer players the Roadrunner will tend to have a straighter path overall. Coupled with the high glide rating, newer players will be able to get more distance out of the disc than with other Speed 9s.

For more experienced players, a Roadrunner can be a great addition to your bag as a roller and specialty shot disc; for distance shots, it can flip aggressively after 250 feet or so. Many experienced golfers debate the pros and cons of the Roadrunner versus the Sidewinder – the only ratings difference between the two is that the Sidewinder has a -3 turn.

What it comes down to is the Roadrunner has two personalities. When thrown with less power, i.e., by a new player, it tends to fly straighter and make more use of the glide. When thrown with more power, i.e., by an experienced player, it can turn over much more and be less accurate but can also allow players to experiment with wrist position and consistent release.  Want to see if this is the best distance driver disc for you?  Read on below:

Types of Plastics for Innova Roadrunner

The Roadrunner is only available in premium plastics (Star, GStar, and Champion), so it will maintain its structural integrity for a long time. All three plastics are highly rated for durability and grip but are geared more towards professional players. 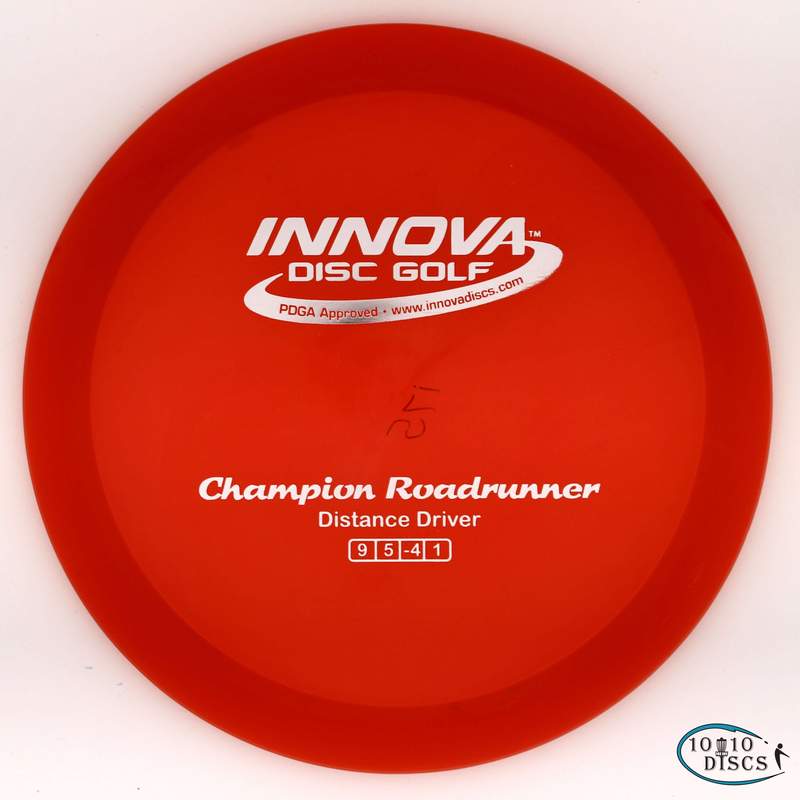 Star plastics are known for their grip, in comparison to that of the Champion line. It is also the only line to utilize recycled plastic with its Echo Star sub-brand. If you’re looking to customize your disc, the Star line is part of the InnColor custom program, as well as custom hot-stamping.

The GStar line is the most flexible and grippy of the three lines. It does not have any customizable sub-brands, but it comes in a popular pearlescent sheen. It is known for being just as durable as the Star line, but with additional flexibility year-round. Many players in warm climates avoid this plastic – but make no mistake, this plastic performs excellently in both weather extremes!

Champion is the least flexible plastic of the three but is most suited to professional players due to its firmness, stability, and predictability. One of the sub-brands, Blizzard Champion, allows for the same stability with a weight reduced by almost 20 grams. Champion plastic is also available with metal flakes for added beauty, glow-in-the-dark plastic, custom hot-stamping, and I-Dye designs.

Certainly, the Roadrunner is more of a favorite of newer players since it’s easy to gain distance without much power, but it comes down to preference for more experienced golfers. If you’re just starting out, it’s easy to learn on, and you’ll get a better feel for your capabilities. As you improve, it may become your trick-shot disc rather than a well-used distance driver, but it’s worth keeping around. Plus, it’s durable enough to last beyond your learning curve.

Overall, the Roadrunner is a solid disc. It’s great as a distance driver for beginners and as more of a finesse disc for experienced players. I recommend that every player have one of these in their bag as it has good use across the board. It’s also the most understable distance driver offered by Innova, so it has the capability of performing shots that other discs just can’t accomplish. The fact that it comes in Innova’s top-of-the-line plastics is just the cherry on top – everyone loves a disc that can take a beating!  If you are looking for some other disc recommendations, check out our best picks guide!  Other recommended distance drivers include Destroyer, Daedalus, Discraft Nuke!