One of the most tried and true disc golf companies out there, Innova, also happens to produce one of the best beginner disc for mid-range shots, the Innova Shark.

The Shark has a reliably straight flight path with only a slight fade at the end, it is fantastic for all arm speeds and is easy to make the shot you want. A very accurate disc for drives and approach shots, you can even putt with it.

Anytime you’re looking to make a straight throw or a tunnel shot, the Innova Shark will make it easier and simpler than ever before. 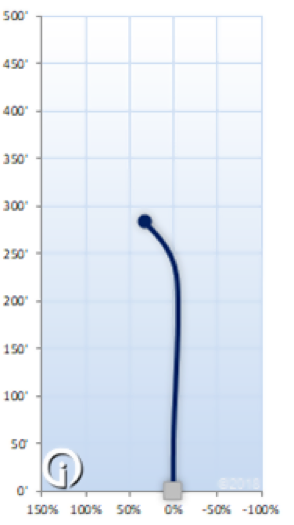 Primarily a mid-range disc known for it’s predictable straight flight path and slight fade at the end. The Shark can be counted on to fly straight when it is thrown, this is one of the main reasons it’s in the Innova beginner pack.

With a weak fade on its flight path, you can rely on it for the majority of your shots, making it a great all rounder. Known to also handle subtle hyzer and anhyzer lines well to boot.

This disc is great for beginners as it is very consistent, allowing them to focus on improving their technique without worrying about whether their disc is a good fit. This disc is also very effective in the hands of all skill levels for the same reason, it’s reliable. Whenever a simple straight shot is needed, you can also count on the Shark to perform well.

If other beaded mid-ranges have never clicked with you or you are a beginner just starting out, you should check out the Shark.

Pros of the Innova Shark:

Cons of the Innova Shark

Considered by many to be the highest quality plastic, along with Champion Plastic, for Innova discs. The all weather grip present gives it the good grip and feel of the Pro while it’s durability gives it the lasting power of the Champion. 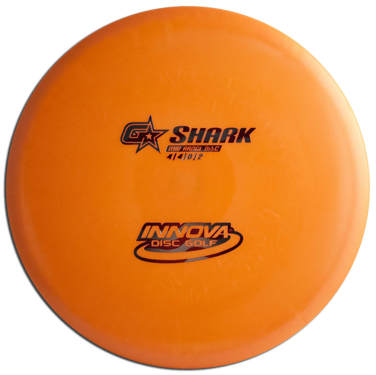 With these characteristics, GStar Plastic is often a go-to for tournaments or whenever you're looking to play at your best.

Overall, the GStar Plastic is widely considered to be the best option for the Shark due to its grip, consistency, and durability.

As the disc degrades extremely slowly, the disc will retain the same flight patterns for longer throughout its use. As discs made from Champion Plastic tend to be stiffer than others, powerful throwers are very well suited to it. 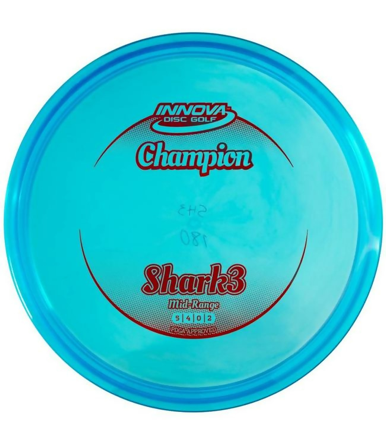 Overall, the Champion Plastic is considered to be the best or second best option for the Shark as it provides great durability but it is better suited for more advanced players as it good for strong throwers.

Having the grip of the GStar but without the durability, Pro Plastic has some advantages over other plastics. One main advantage is that it provides increased glide and grip which can help greatly in drives. 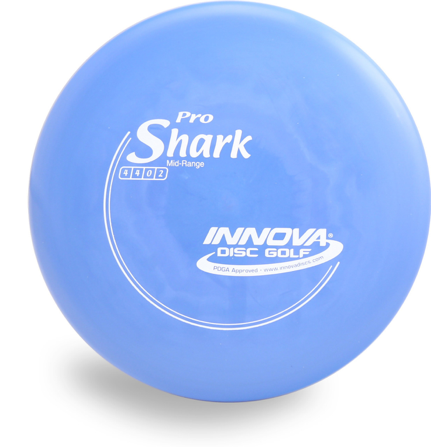 Being more consistent than the DX Plastic yet less than the GStar or Champion Plastic, the Pro Plastic provides a middle ground between the two levels.

Overall, the Pro Plastic does not stand out in many areas and seems lackluster compared to the GStar and Champion Plastics but many players still love this plastic for its feel and grip.

The most affordable, and thus least durable, plastic that the Shark comes in. DX Plastic is good for a wide array of weather conditions and does provide consistent throwing capabilities. 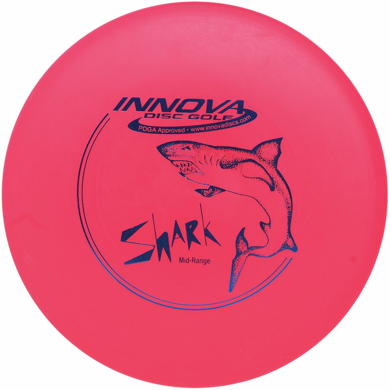 The major downfall of this disc is it’s durability. It will quickly take on wear and tear and its flight patterns will change faster than the other plastics.

Overall, the DX plastic is good for budget buyers and is therefore great for new players who don’t want to make a large commitment.

The Shark is one of the, if not the, best mid-range disc for beginners while also being reliable and effective for more experienced players. Its simple and consistent straight flight pattern makes the Shark great for many situations and players.

But overall, this is a disc that is fantastic for beginners, for experienced players, other options like the Roc can present a better option.

As far as plastics go, GStar and Champion seem to be preferred to Pro and DX but all of the plastics have their purposes.

At the end of the say, the Innova Shark is one of the most reliable mid-range discs out there, a great disc for beginners and experts alike.  If you like the shark, see what other Innova discs made our list of ​disc golf disc reviews!